This particular pattern book, Columbia Minerva - Volume 734, is one of those rare pieces that was issued with patterns for men only.   It contains solely knitted sweaters being modeled by an assortment of men that range from quite cute to downright handsome.    In case you are interested in seeing a range of mens' sweater patterns, or viewing handsome men, let me show you both. 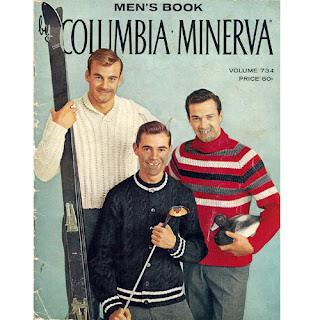 Mens Book - Columbia Minerva - Volume 734
features three of the patterns in the book.   I was unable to rescue the patterns for two of the sweaters (the same person who drew on their facial hair scribbled all over those pages), but the third pattern - 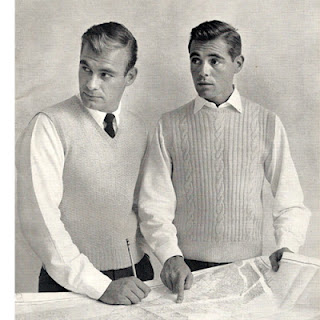 These two, apparently distracted, dapper young men have chosen for todays' wardrobe:
734-3 (on right) a round neck vest with cables.
734-4 (on left) a v-neck with light ribbing at openings has that soft, you know you want to touch it, look. 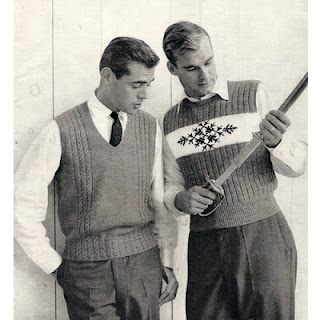 Two more pullover vests and two more handsome young men.
734-5 (on left) with v-neck and cables down the front sides.
734-6 (on right) with wide ribbing and a winter motif on the chest. 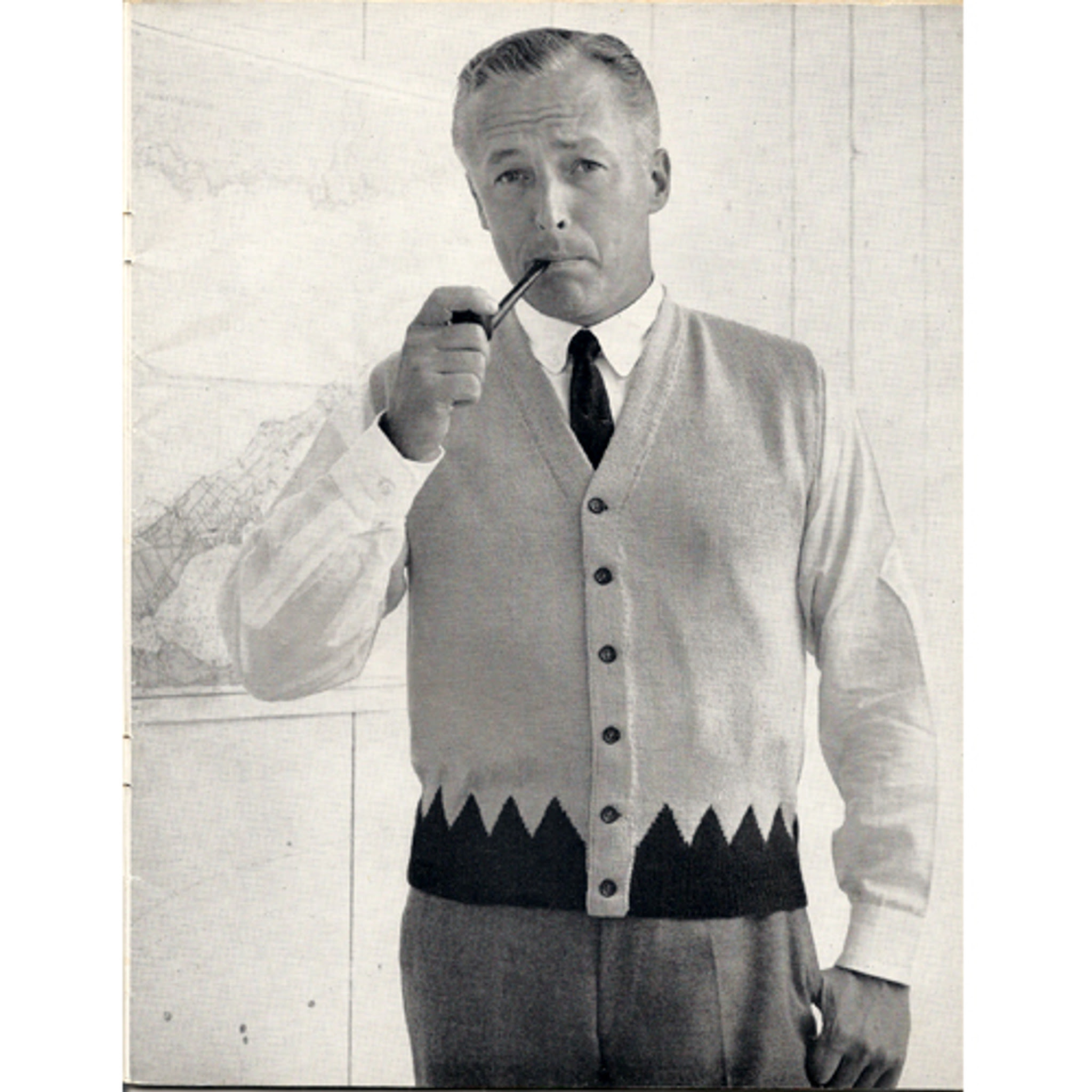 This dignified gentlemen is modeling 734-7 - a buttoned down sweater vest with a rather unique half
diamond band along the bottom. 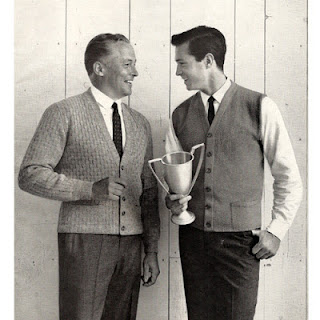 Here we have a smiling pair of gents, obviously in the throws of celebration.
Our trophy holder, is wearing 734-8 - a sleeveless buttoned vest with short v-neck and one patch pocket, whereas our friend on the left has a buttoned cardigan sweater with dual pockets and waffled pattern stitch. 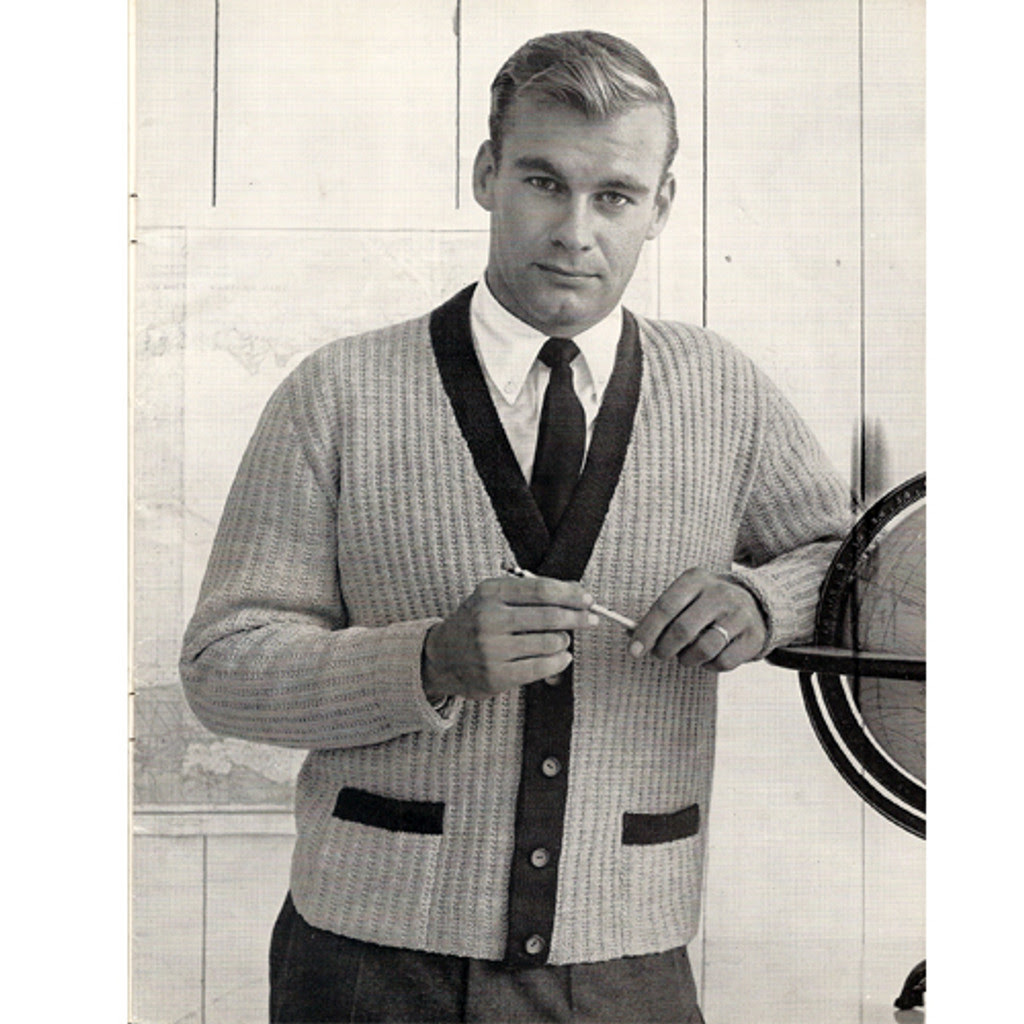 Hello Handsome.  You are looking great in the Minerva 734-10 Allover Ribbed Cardigan, with front banding and pockets. 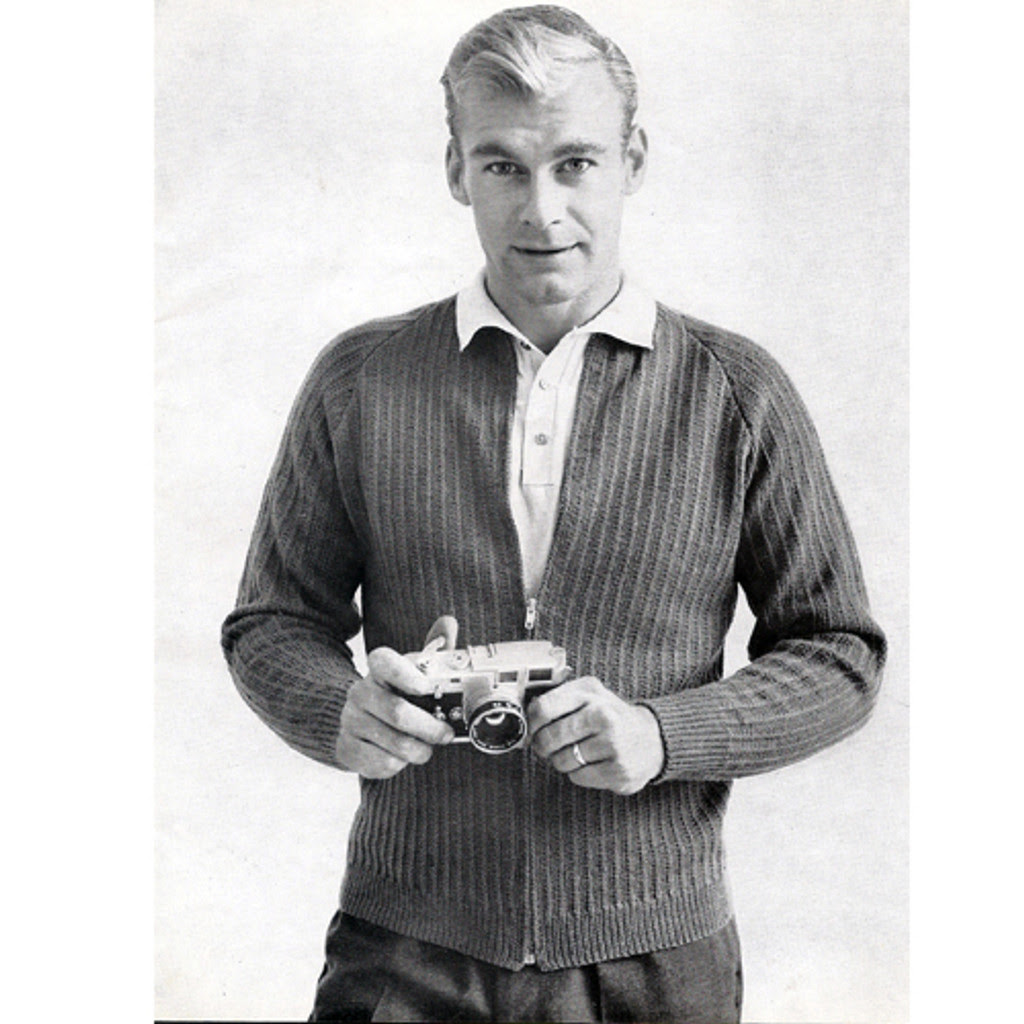 And, equally as great, is Mr. Handsome's possible brother, sporting a deeply zipper cardigan sweater  (734-11) with a front zipper versus the usual buttons. 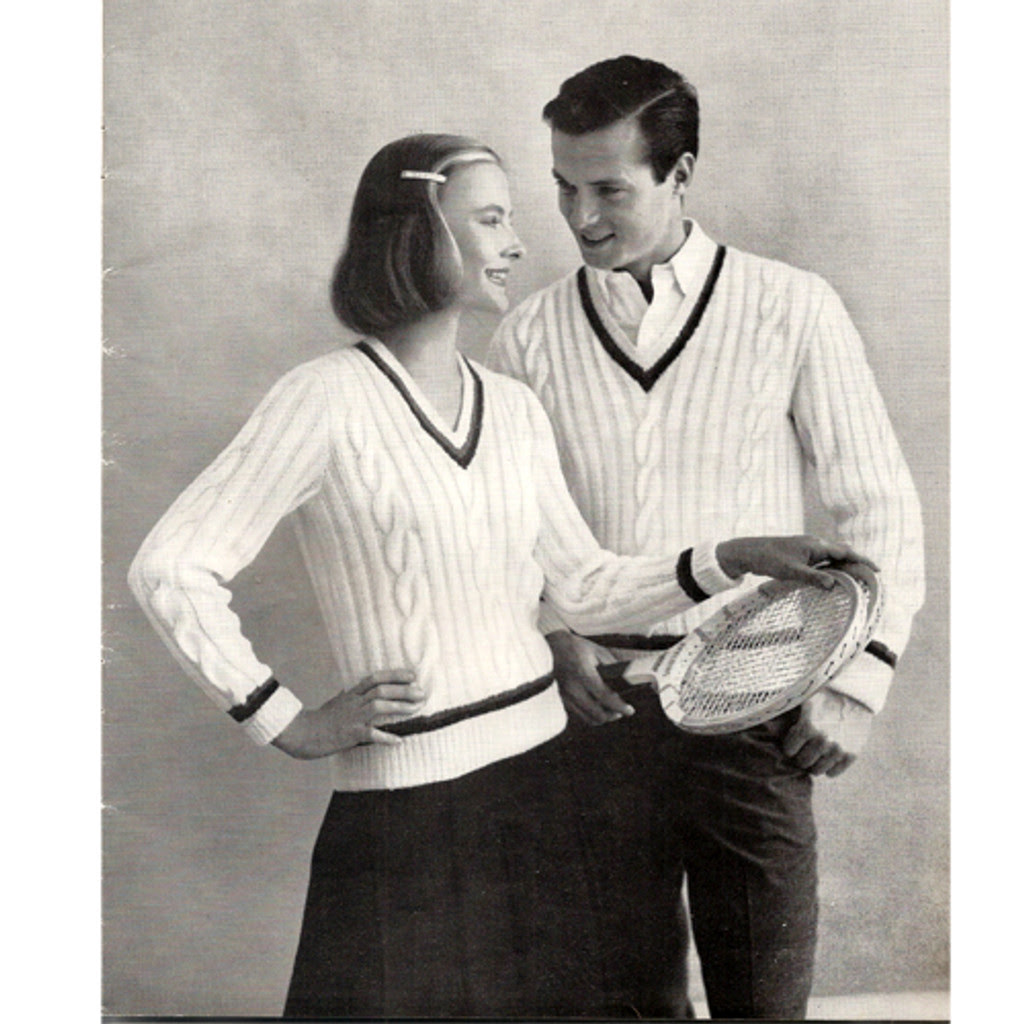 The only pattern in the book that features a woman, who not only is in the accompany of a charming young man, but sporting matching (734-12&13) His and Her Pullover Sweaters. 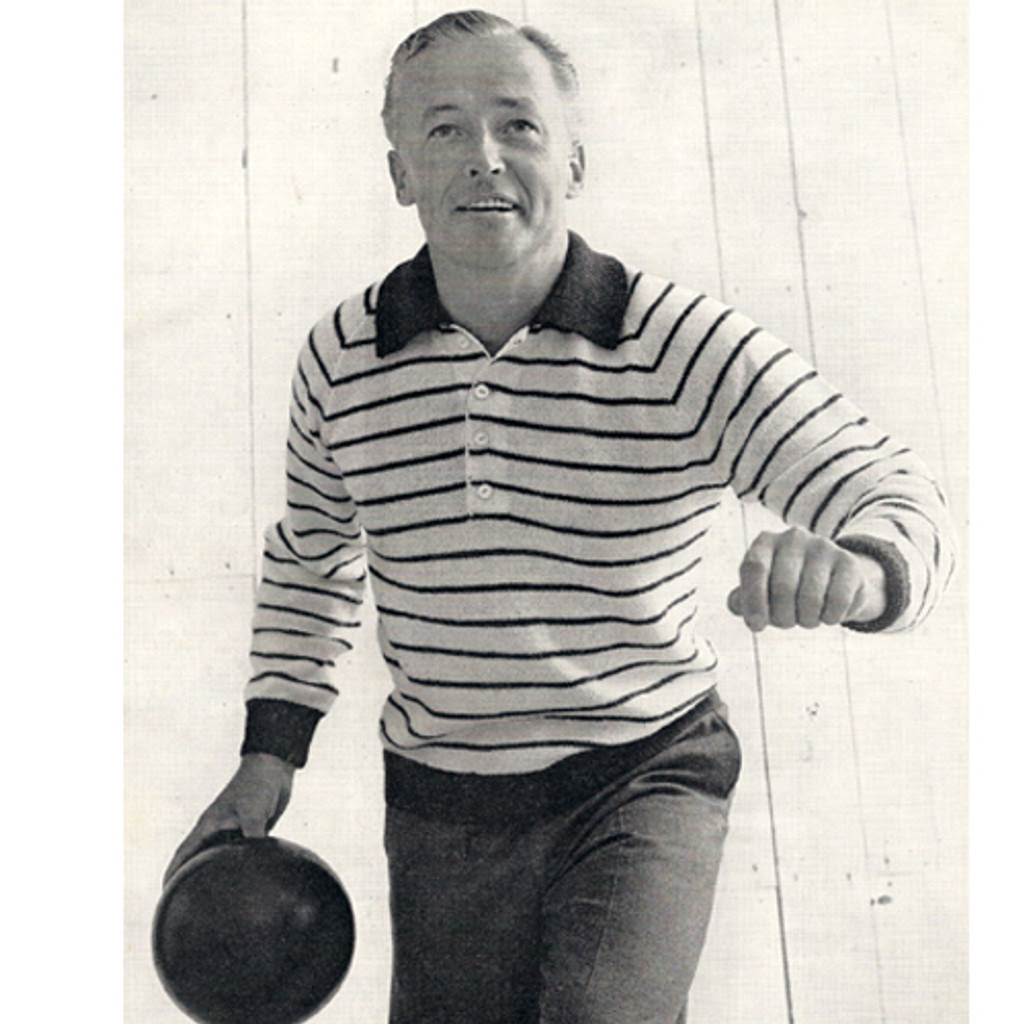 No 734-14, a sporty long sleeved sweater is sporty and light spirited. 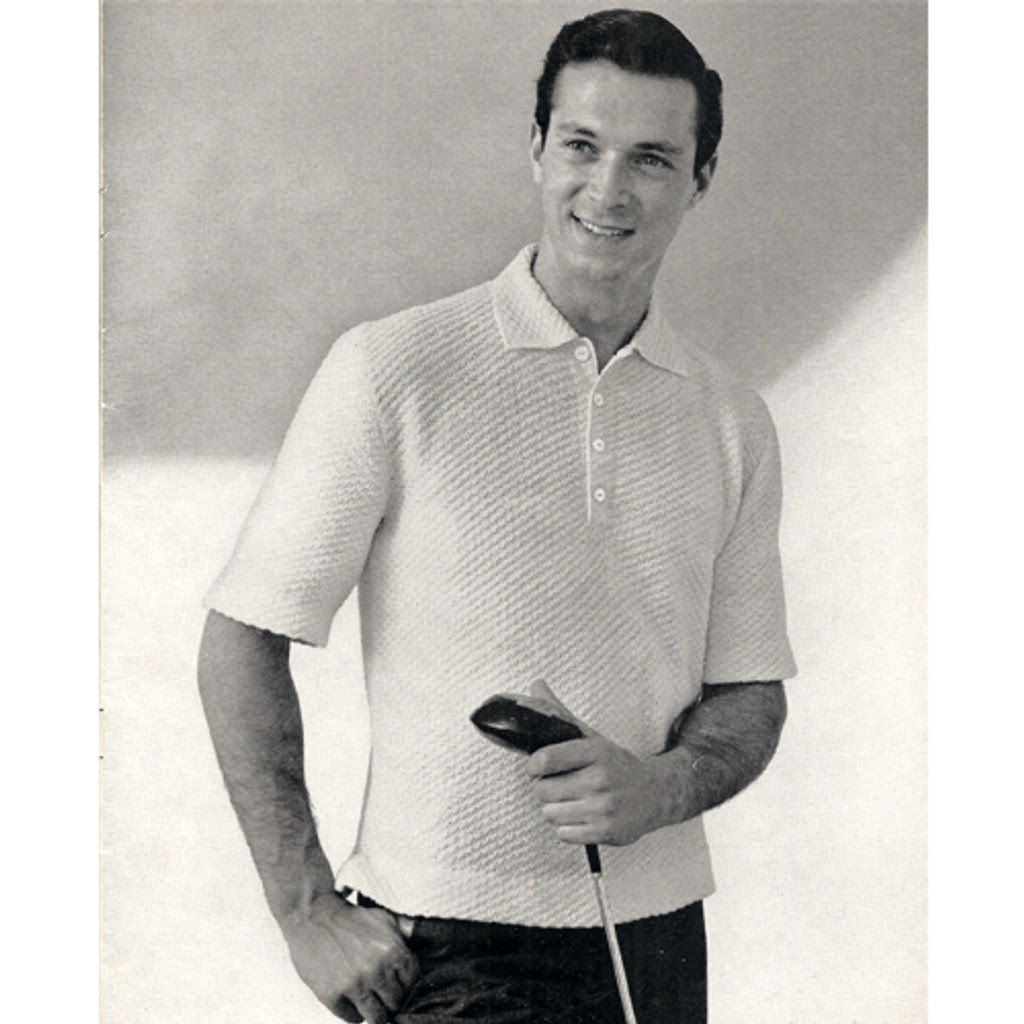 I turned the page to this smiling young man, and was immediately charmed.   How Tom Hanks in Big!  The shirt (734-15) is also nice - elbow length sleeves, front button closure and small diagonal pattern stitch. 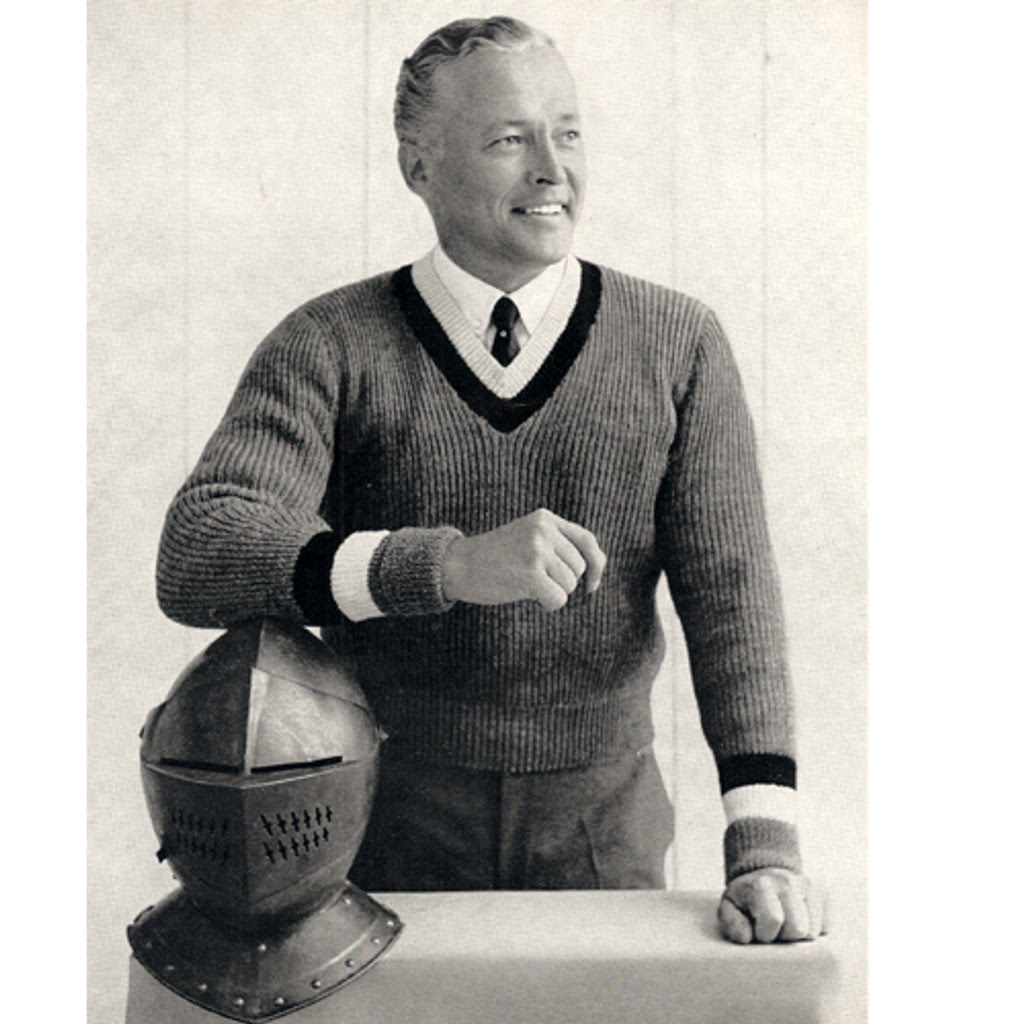 No 734-16 is an aristocratic choice with it's ribbing, long sleeves and color bands.  Perfect for the young, and no-so-young. 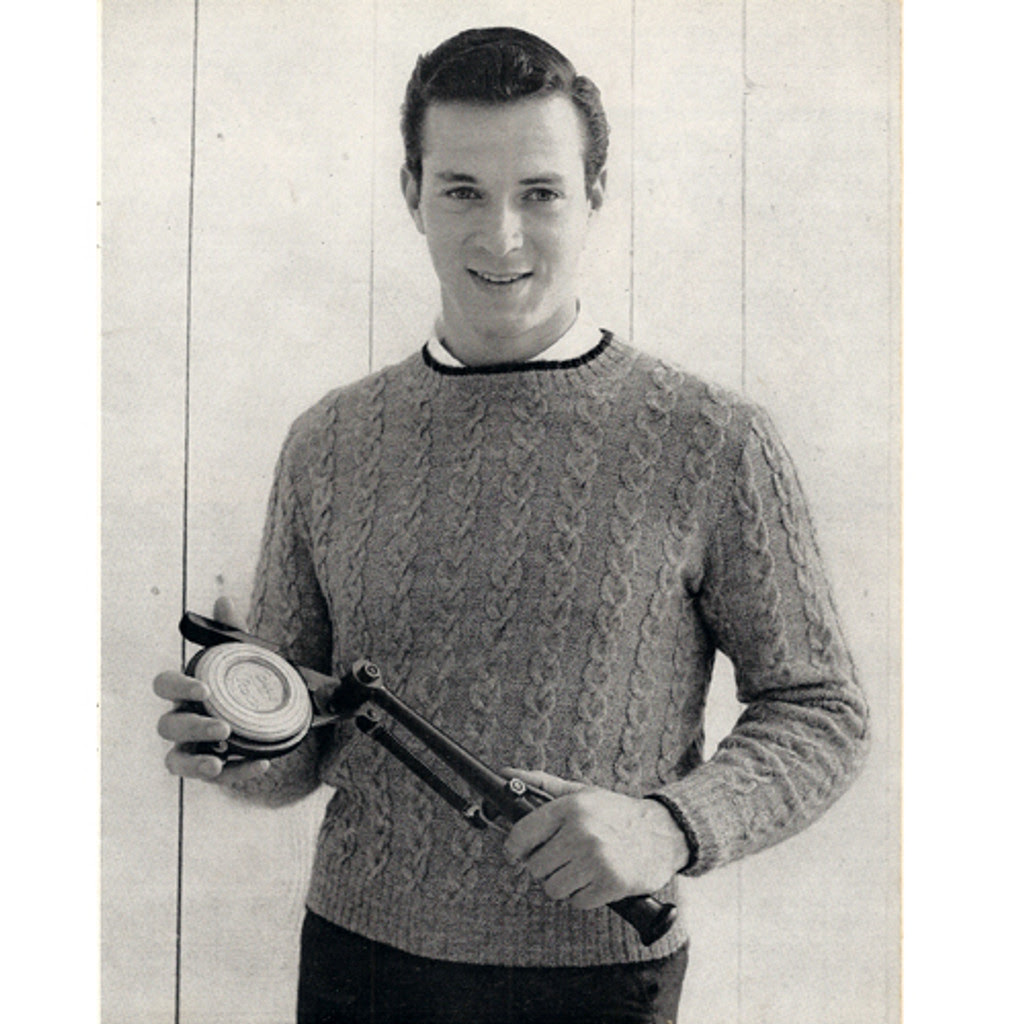 Here is the adorable Smiling Man from above, this time wearing a straight forward cable sweater (No 734-17)  with just a bit of color contrast at the neck and cuffs. 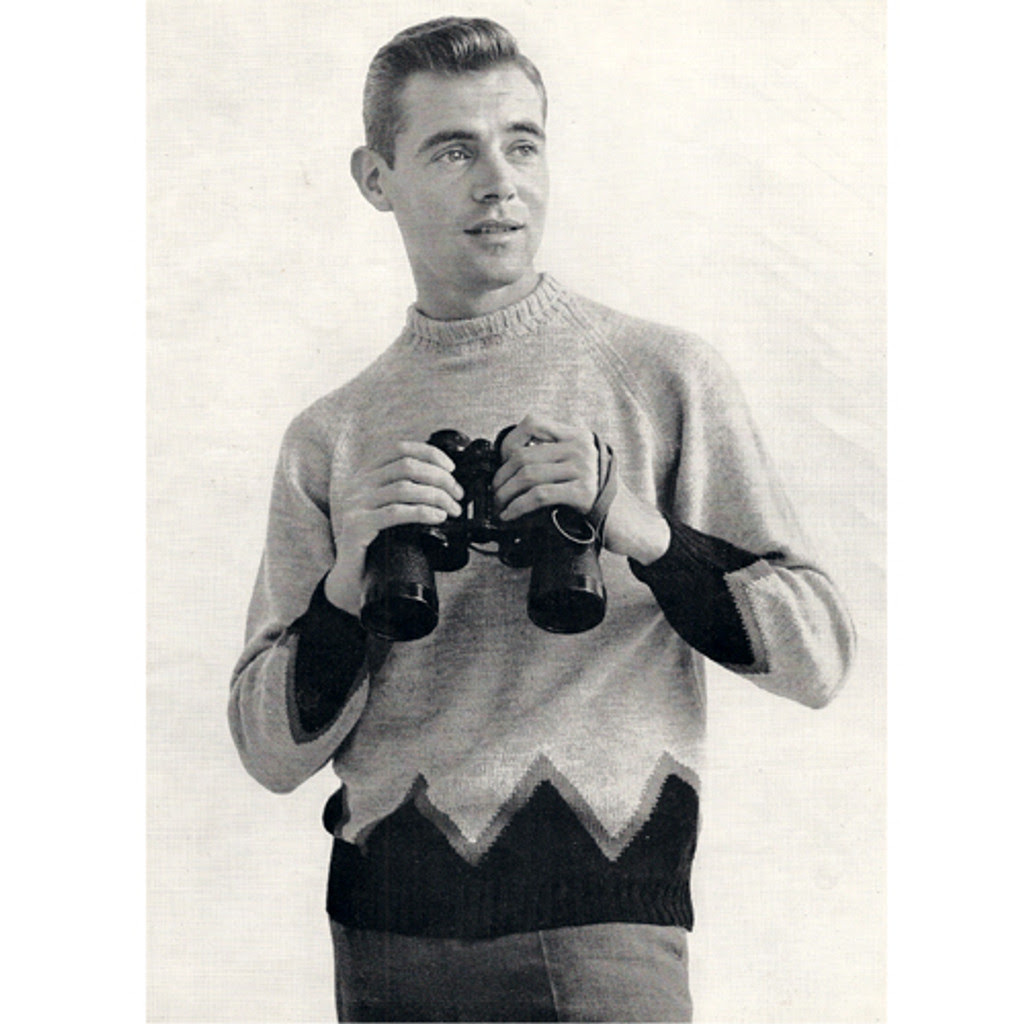 This sharp and intriguing young man is wearing an equally so sweater, (734-18) a knit raglan with a two tone half diamond motif at the hemline and sleeve ends. 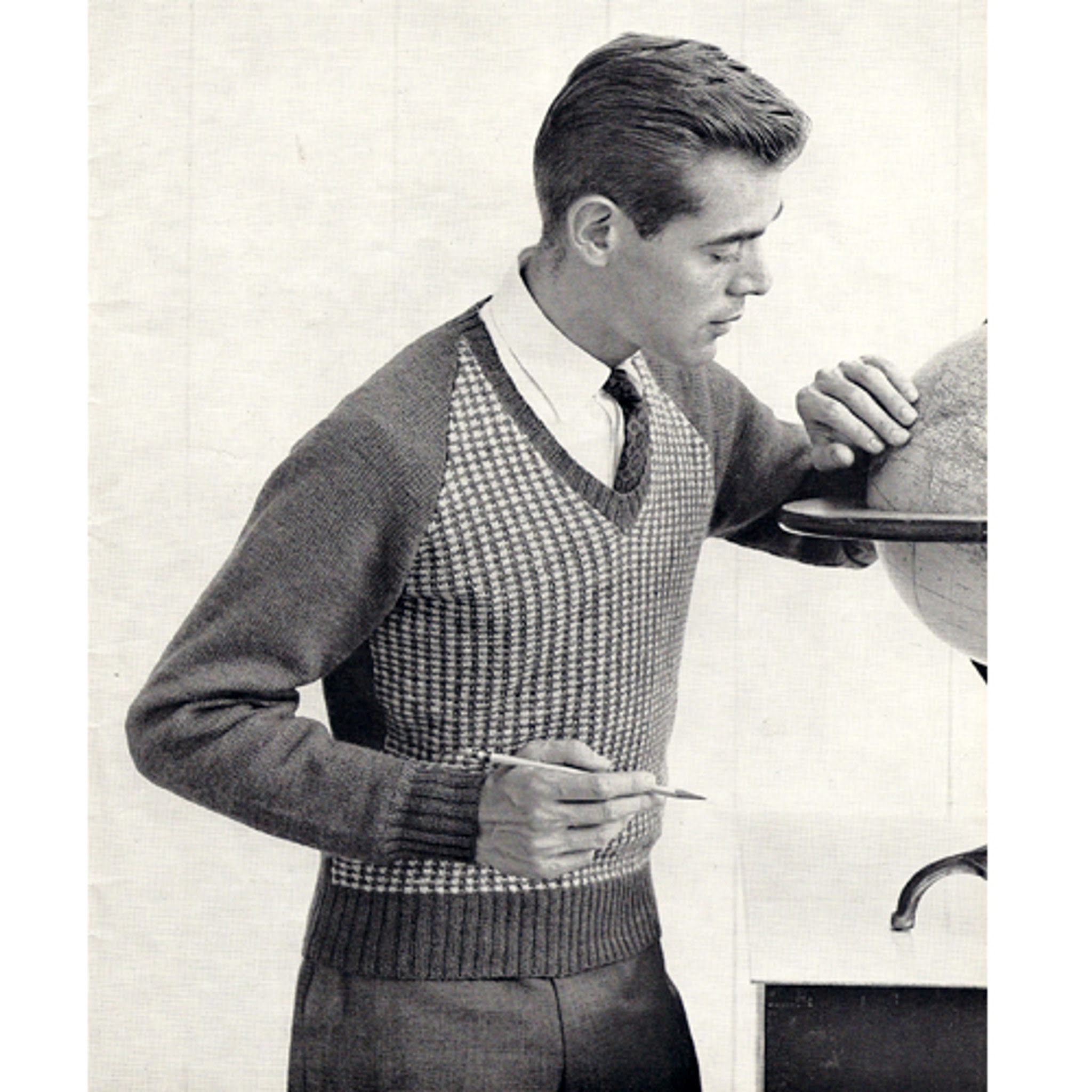 Here we have a studious clean-cut chap in 734-20, a mans raglan sweater with a checked tweed on the front and contrast solids on the back and sleeves. 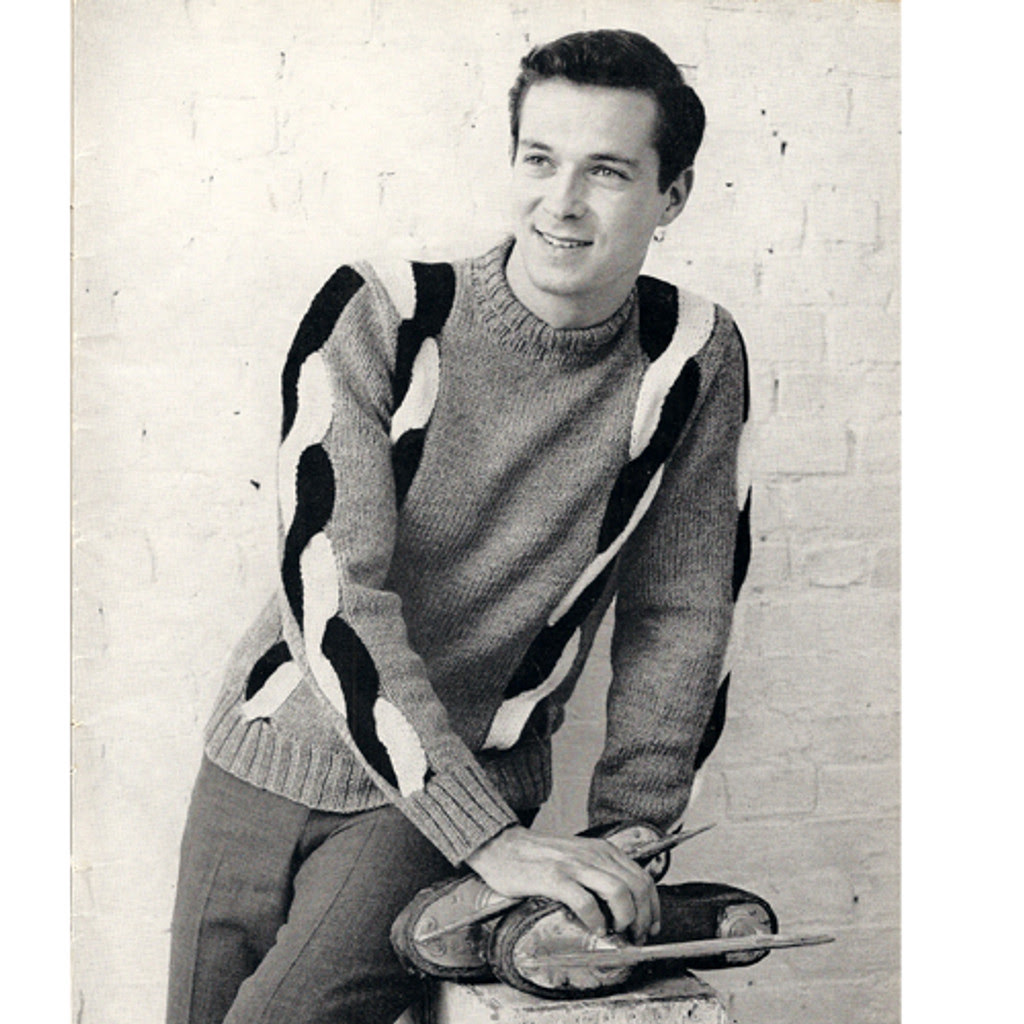 This sweetheart is wearing 734-21, a sweater design a bit different that has crossed bands that run across the shoulders and down the sides and arms. 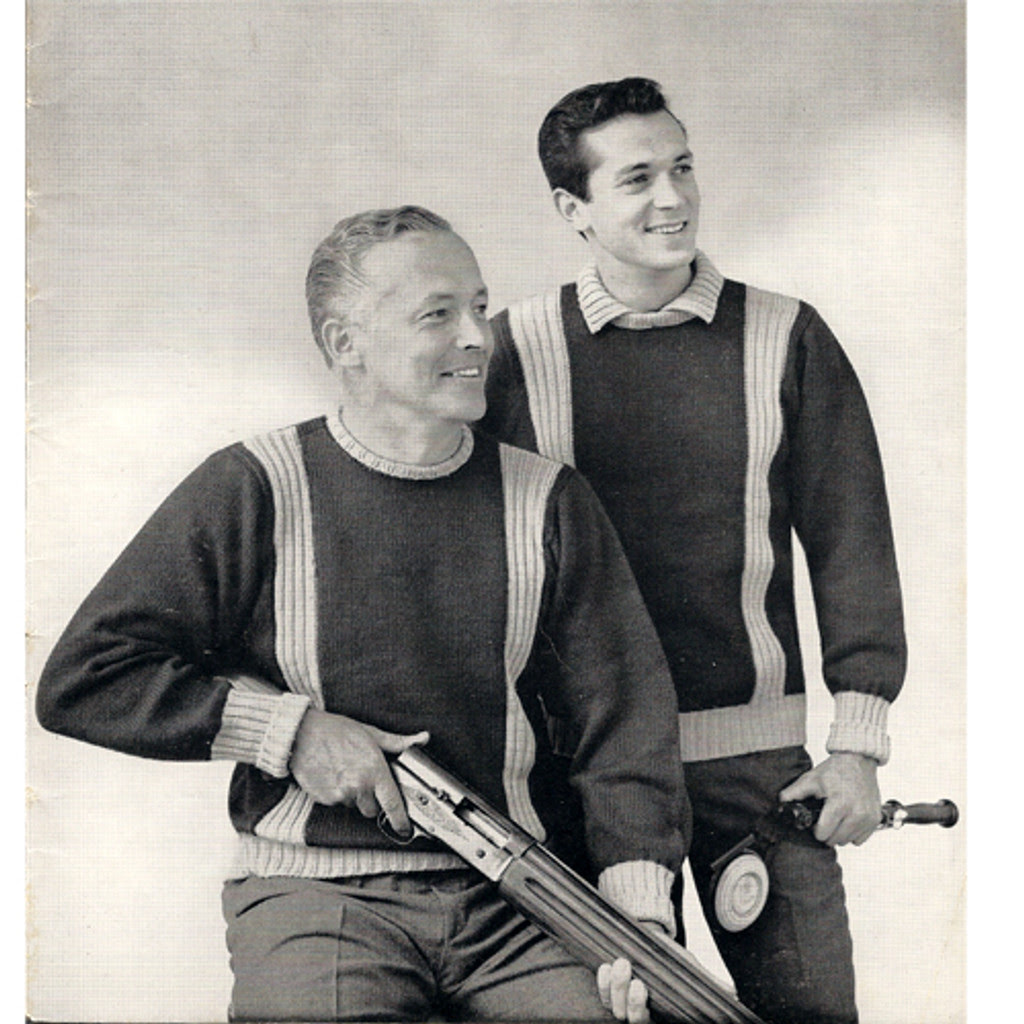 These rugged sportsman each have sweater No 734-22.  A solid, loose fitting design with bands down the front and contrast ribbing.  It also gives the wearer the choice of collar in or out.

And, as usual, the front page is the same as the back page.

Again, these designs are vintage 1960s.   Most would make perfect choices for todays wear.  The only issue, that the 50 years has going is the length.  Most styles of the 2010's, at least currently, are longer in design.  Which means, the talented knit artist would need to add rows of length.

So, what do you think.   Charming men -- yes ???   Interesting patterns -- some, I'd say.   These patterns are listed separately in my shop, just following the respective links below the pictures, should you be interested.

Thanks for dropping by for my picture show,
Lorrie