Crocheted Tablecloths of Round Medallions

A neighbor, going through boxes that had belonged to her grandmother, came across a couple crochet patterns, which she was kind enough to pass on to me.   She said she found nothing else that was crochet pattern related and had no knowledge that her grandmother was creative in any form.   Yet, she had held on to these patterns for a Very Long time.   All three patterns are free leaflets and all are dated 1939.   Although folded, they are in Very Good condition. 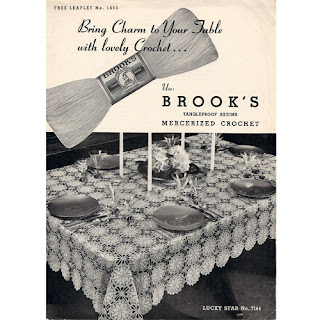 Officially called Lucky Star No 7144.  It was issued as Fre Leaflet No 1555 and has an encircled star motif.      Variations of this pattern have circulated several times.  I know I've seen it in a late 50's American Thread book as a table runner. 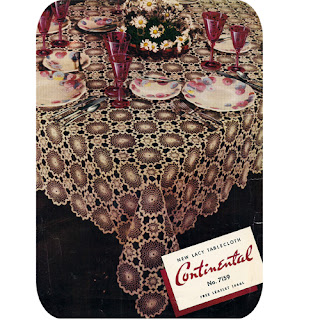 This is Continental No 7159, issued in Free Leaflet 1466L.   A semi spider web type design and measuring 60 x 81 inches.  The large motifs are 4 inches and and small are 2 1/2.   With a little heavier thread, this would make a wonderful bedspread as well.

This is the Worlds Fair Cloth Pattern.   It is another that has recycled.   I browsed around and apparently the motif is the same as that of the World Fair and was reissued to commemorate the different events.   This particular pattern does not state a size.  Just keep creating the motifs until you reach your desired size.

So, I know several things about the original owner of the patterns.    Her name was Martha, she lived to be 92, she had a granddaughter named Linda and she collected three crochet patterns all with a circular motif.

I've reformatted the patterns to clear clean copy, maintaining the original cover art and have listed in my shop, through the above links, should you be interested.  If you are looking for a specific vintage tablecloth, I have a ton of them (well, not literally), in the shop.  You might also want to look in the Squares and Medallions section as well.

Thanks for dropping by,