A Quite Popular Crochet Pineapple Doily

Some of the Mail Order Design patterns were more popular than others.   But how can you tell which ones were the 'most popular'?   That one is easy ....  by how many times it was duplicated. 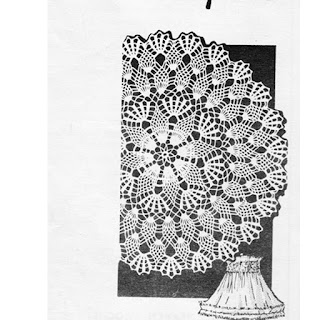 Lets take this marvelous Mail Order Pineapple Doily as an example.  The doily, depending upon materials used, can be  made in six different sizes ranging from a small of 11 all the way to 25 inches in diameter.

And, apparently the readers loved it .... 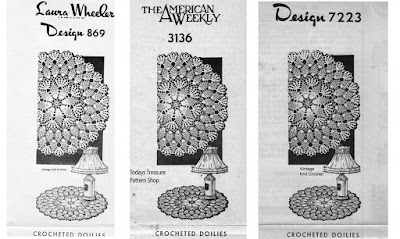 Design 869 (Laura Wheeler) was released in April of 1951.  "Crocheting this doily is time well spent.  Stunning in two colors; start the second color on the second pineapple round".   It was ran again in 1954.

Design 7223 (Alice Brooks) was published in 1957.   "Crochet with an heirloom future - as centerpiece, placemat set - prize winning doilies.  Lovely in two colors, starting second color in second pineapple round".  It was ran again in 1959.

And it was released in a separate syndicate column as American Weekly 3136.  (I don't know the dates or description), but would assume it was in the same time span ... or, based on the paper quality, no later than 1961.  I'm just beginning to understand that American Weekly was apparently associated with Readers Mail.

And that's how the it went for the popular designs.   They are released, and if sales are more than typical, they are the sister name -- Laura Wheeler or Alice Brooks and even more sales were made.

I'd wonder how frequently the fiber artists buying these patterns discovered they bought the same Design twice !

Okay, I'll get back to work now.    Thanks for dropping by.